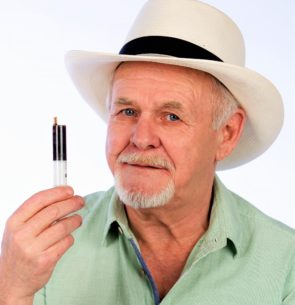 Cannabis Activist and Promoter of the Medical use of Cannabis Oil

Rick Simpson, after rediscovering the healing abilities of cannabis oil back in 2001, claimed that these extracts can cure/control many diseases, including epilepsy, Alzheimer’s, cancer, multiple sclerosis, PTSD, and many other diseases and conditions.

Simpson’s observations have been replicated by doctors, dispensaries, corporations, and individuals across the world. Various scientific studies have also confirmed Simpson’s claims, and have proven the medicinal properties of THC and CBD, as well as other cannabinoids, thus leading to (partial) legalization of the use of this “prohibited plant”, which had been used by many civilizations for thousands of years.

Rick Simpson put up the phoenixtears.ca website in 2004 to spread the knowledge about the healing abilities of cannabis extracts. Today, these extracts are usually called RSO or Rick Simpson Oil.

Rick did not even try to patent the oil or the method he used to produce the oil, because he felt that this is knowledge everyone should have so they could learn how they can deal with their medical problems themselves, in a sensible harmless manner.

For the past 15 years he has been fighting for the repeal of all laws concerning the regulation of cannabis use with the aim of making it once again freely accessible to all. He has held many lectures around the globe.