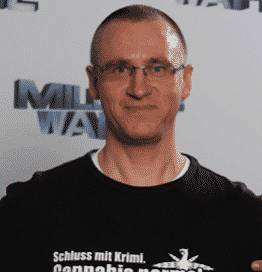 Georg Wurth is a former financial officer with extensive political experience. After the Abitur, he studied tax law at the University of Applied Sciences with the degree as financial economist and at the same time joined the policy at Bündnis 90 / Die Grünen. Since 1996, he has also intensively dealt with drug policy. From 1997, he was chairman of the parliamentary group in Remscheider Stadtrat and as such was represented in a large number of committees, including some supervisory boards and the city councilor. After a self-report about cannabis possession, he founded the Landesarbeitsgemeinschaft Drugs in NRW and has been involved in the Drugs of the Green Youth Forum. Until his 11-month World Tour (2000-2001), he was also a treasurer in the Federal Government’s Green Youth. Since his return in July 2001, he was the first director of the Federal Network Drug Policy (BND) at the Greens. In 2002, he became Managing Director of the newly established German Hemp Association, which he then took over as the sole proprietor in 2004 and is still managing today. Georg Wurth is also active in various other drug-related initiatives, e.g. At the “Schildowerkreis”.